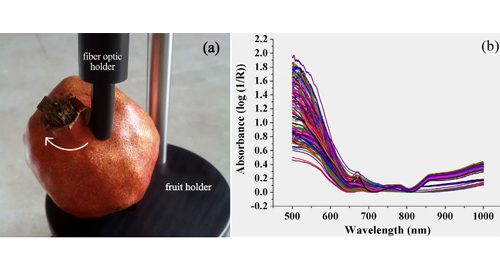 In this research, the feasibility of utilizing visible/near-infrared (Vis/NIR) spectroscopy as an optical non-destructive technique combined with both supervised and unsupervised pattern recognition methods was assessed for detection of Ectomyelois ceratoniae, carob moth, infestation in pomegranates during hidden activity of the larvae. To this end, some fruits were artificially contaminated to the carob moth larvae. Vis/NIR spectra of the blank samples and the contaminated pomegranates without and with external visual symptoms of larvae infestation were analyzed one and two weeks after contaminating the samples as three groups of “Healthy”, “Unhealthy-A” and “Unhealthy-B”, respectively. Principal component analysis (PCA) as unsupervised pattern recognition method was used to verify the possibility of clustering of the pomegranate samples into the three groups. Discriminant analysis (DA) based on PCA was also used as a powerful supervised pattern recognition method to classify the samples. The calibration models of linear, quadratic and Mahalanobis discriminant analyses were developed based on different spectral pre-processing techniques. The best PCA-DA model was obtained using Mahalanobis distance method and first derivative (D1) pre-processing. The total percentage of correctly classified samples with the best calibration model was 97.9%. The developed model could also predict unknown samples with total percentage of correctly classified samples of 90.6%. It was concluded that Vis/NIR spectroscopy combined with pattern recognition method of PCA-DA can be an appropriate and rapid technology for non-destructively screening the pomegranates for detection of carob moth infestation during hidden activity of the larvae.